I remember it like it was yesterday.   Oh, yeah.   I guess that’s because it was today.  Heh, heh.  And so the last thing Pretty said this morning when she raced out the door to go to work at the General Store with her lunch sack and phone and big blue straw bag that holds everything in the world for Pretty was, “Okay, you guys.   Take good care of Slow today while I’m gone.   She needs plenty of rest and relaxation so no stress whatsoever in any shape or form today and that goes particularly for you, Red Man.   No drama of any kind, do you hear me?”

“Oh, yes, Pretty,” I said.   ” I hear you loud and clear and you can count on moi for the utmost in compliance and cooperation for low key in Casa de Canterbury today.   I wouldn’t dream of upsetting any apple carts during the old woman Slow’s recovery from getting her new eye.   Don’t you worry or fret the first instant about anything today.   The Red Man gets the total picture and will whip the rest of this Pack of Pups into shape, too!”

And then, and then, and then you know what?   Well, I’ve been so NERVOUS with this surgery thing and everybody’s been so UPTIGHT and all and we had so many Peeps in the casa (which is Spanish for house) this afternoon.   Some nice Old Friend Peep brought food to Slow for her lunch and she visited for a while.   Then, of course, Amiga Driver was here for most of the day to try to help Pretty and keep things running smooth for the old woman who is pretty much as I’d predicted, worthless, if you catch my drift.   All she does is put eye drops in her new eye and snooze and watch Wimbledon.   Worthless.

Then Amiga Driver’s El Hombre Numero Uno and his brother El Hombre Numero Dos came over to see how the old woman was recuperating so she talked to them and then the daffy old twit announced she had to go to bed to REST, for God’s sake, as if she’d been doing anything so off she went upstairs followed closely by Smokey Lonesome Ollie, Tennis Ball Obsessed Chelsea and Paw Licker Annie who has her helmet head on today.   Geez Louise.   They looked like a parade of misfits heading up the stairs to the king-sized bed for their naps.   And, then… I don’t know what happened, but something inside me just went SNAP, CRACKLE  AND POP and when Amiga Driver opened the front door to leave, I WAS GONE…that’s right ADIOS, AMIGOS, GET ME OUTTA HERE, PERCY – I’M BLOWIN’ THIS POPSICLE STAND!!!

Lickety split gone, running so fast these paws barely touched the ground gone, feeling the breeze blowin’ in my face gone.   Amiga Driver was running as fast as she could and I could hear her feet pounding behind me for a little while as she yelled frantically at me to come back.   Sorry, Sister, color me not interested.   I’ve got nothin’ but wide open neighborhoods ahead of me, and I’m in the FREE ZONE now and it’s a zippity-do-dah-day.   My, oh my, what a wonderful day.   Plenty of sunshine headin’ my way…zippity-do-dah, etc.

Whoa, Nellie – what’s this pulling up next to me?   Curses, foiled again.   It’s El Hombre Numero Uno with Amiga Driver in their car.   Those two are sly ones, aren’t they? 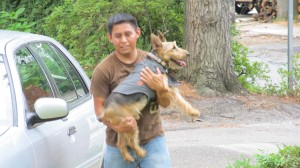 No fair using cars to come after me.   That’s like cheating, isn’t it?   Now, now, hold your horses.   I’m getting in quietly.   Such a fuss over nothing.

And of course when they brought me back, there was the old woman Slow standing on the front porch in her red t-shirt and red pajama bottoms with the Westie and Scottie Pups on them and what a picture that was.   She thinks nothing of wandering around in the yard in those horrible outfits.   Dear God, what must the neighbors think?   Well, there she was looking all STRESSED and DISTRESSED and anybody could see the nap was over.

Oh, Pretty, I don’t know what came over me and I’m so sorry for the little mixup.   The only thing I can figure is that The Devil made me do it and sometimes I lose a battle or two with him.   I promise I’ll do better tomorrow, if you’ll just give me one more chance.   God bless you, Pretty.