Pretty was in the House and we all lived the Good Life while she was here, let me tell you!   Yessiree, Amigos, Pretty came to the ‘Hood and assumed her rightful position as Queen of the Casa (which is Spanish for house) and her loyal subjects – The Red Man, Smokey Lonesome Ollie and the old woman Slow – totally adored her while she reigned over us the past three days.   That is, we adored her when we had the time.   But with Pretty around, our activity level moves up to Warp Speed and adoration time occurs late at night when she’s ready to hand out Pretty Pets.   As you know, The Red Man loves him some Pretty Pets.

What does Pretty like to do?   M-O-V-E and be quick about it.   We took a walk through downtown and in the park and I swear I was practically dead by the time we got back to Worsham Street.   Smokey Lonesome Ollie held up better than I did, but the old woman Slow was about to have a heat stroke.   Dear God, she huffs and puffs along like a freight train going up a hill.   Whew.   Whew.   What did we ever do without an airconditioned house to cool off in??

Thank God for a cool hardwood kitchen floor.   Seriously.   The Red Man needed a REST after his walk with Pretty, who is a Girl on the Go.   And Brothers and  Sisters, she was on the Go while she was here.   She hit all the antique shops she could find in three days and in between visited Granny Selma who is as old as dirt and the Favorite Aunt who’s still in the hospital in Beaumont.   I know this because I heard Slow telling it to one of the Little Women on Worsham Street and not because I was invited to go along.   For once, I didn’t care.   I was still recovering from our walks.

But, then, all good things had to come to an end too quickly and Pretty took the Big Bird in the Sky to return to Paw Licker Annie and Tennis Ball Obsessed Chelsea in South Carolina so she could be back at work at the General Store bright and early tomorrow morning.   I was heartbroken when I saw her pack her things to leave last night but tried to be brave when she held me for the last time on the front porch this morning. 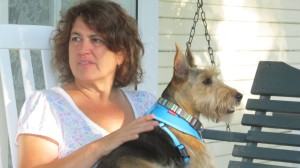 Me and Pretty.   We’re a country music song in the making.   When you can’t be with the one you love, be sad and wait for her to come back.