If Elvis Had Been A Tennis Player… 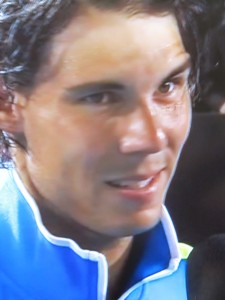 he would have been a Spaniard named Rafa Nadal who is All Shook Up on a tennis court, let me tell you.

Well, it’s one for the money, two for the show, three to get ready and go, Cat, go – but don’t you step on my Blue Suede tennis Shoes!

Roger Federer, you ain’t nothing but a Hound Dog – shooting that tennis ball past Rafa like white lightning. 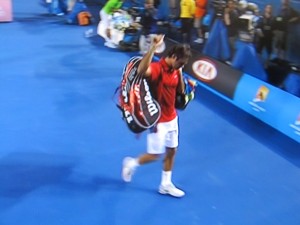 In the end, though, it’s Adios Roger – you’re headed to Heartbreak Hotel.

And Rafa is headed for the Men’s Final of the Australian Open Sunday morning.

Have you heard the news?  There’s Good Rockin’ Tonight!

Ok, Rafa you’re just a Big A Hunk of Burning Love  and The Red Man thinks you’re the King of the Courts like Elvis was the King of Rock ‘n Roll so good luck in the finals of the Down Under Open!  We’ll be pulling for you!!

2 thoughts on “If Elvis Had Been A Tennis Player”