OMG, I hate to say I told you so.   Well, not really.   Actually, I enjoy saying I told you so and what did I just say about the Peep Cousins moving in this week?   I said D-I-S-A-S-T-E-R and Brothers and Sisters, the week started off with a BANG.  I’m talkin’ lots of FIREWORKS in the ‘Hood on Worsham Street!

It all slipped into a higher gear when the old woman Slow had to go to the courthouse in Conroe early Monday morning for jury duty.   Yep, doing her civic duty, blah, blah, blah.   I heard her telling Pretty on the phone Monday night that she set the security system off and the guard asked her if she had a pin in her leg or her hip.   Geez Louise. How OLD do you have to be to have a perfect stranger with a badge and pistol ask you if you have a pin in your leg?!   I fell out laughing when I heard that juicy tidbit.  Anyhow, they let her in and it turned out the case she was assigned to was aggravated sexual assault on a minor, for God’s sake.  The poor old thing thought she’d stepped right into a Law and Order SVU episode only it wasn’t on the USA channel.  It was real life right here in Montgomery County.   Shit house mouse.  Thank God she wasn’t chosen for the jury, but I knew her nerves were jangled when she came in Monday afternoon expecting to see the Peep Cousins hard at work on our casa.

Oops – Big PROBLEMO which is Spanish for problem! 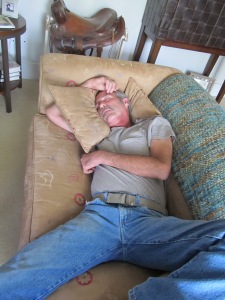 Well, the old woman pitched a conniption fit, as in stomping down the hall and hollering to beat the band and fussing and cussing and carrying on to the point that Spike and I headed for our time out spots just to escape her rampage.   Amigos, I promise you I haven’t heard language that salty flowing out of the old girl in quite some time.   Everybody thinks she’s Miss Nicey Nice but she can be B-A-D when she gets mad and I’d say she was as mad as a Mad Hatter.  So Monday was a rocky start for sure.

Yesterday – Tuesday – it rained.   Not just a little bit of rain, either.  Pouring. So not much work going on yesterday.   Slow was calmer though but Spike was spooked.   He still hates the Peep Cousins.

We can’t seem to find our rhythm with the house full of testoserone.   Nope, the Big T is running rampant on Worsham Street and we’re not the better for it, thank you very much.   At least, today’s sunny and the Peep Cousins are hard at work after a trip to Jim’s Hardware to pick up supplies.

So the Peeps are working, the sun is shining and Slow seems to be back to herself today after her little Monday Meltdown.   At least  the three of them act like they enjoy playing dominos together at night and they’ve made up a domino contest for themselves for the duration of however long they’re going to be here.   That’s good for them, but I have to say I’m still very nervous and don’t get any Happy Vibes from the Spikester Man. 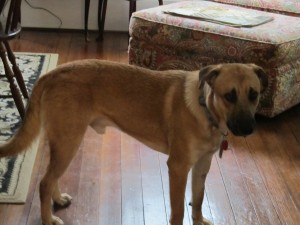 Get me outta here, Percy…Spike and I are bumfuzzled and I need a nap…stay tuned, Sports Fans… 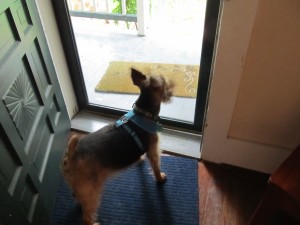