Well, Sports Fans, as much as The Red Man hates to resort to trite phrases in his rants and raves, I’m afraid today all I can say is You got your Winners and You got your Losers and sometimes it gets Rained Out.   Today was all sunshine for the Women’s Singles Finals at Roland Garros Stadium in Paris and Maria Sharapova who looks like a million dollars anyway proved she could still play awesome tennis.   You go Tall Pretty Blonde Girl with your Bad Self and your Broad Shoulders…

The Ecstasy of Winning

You have to admire somebody who comes back from a shoulder injury and gazillion dollar endorsements and TV commercials and magazine layouts and overall She doesn’t really need to work this hard to play tennis any more and puts in the major efforts to regain her #1 in the Whole Wide World Ranking.   Hang on, Maria, as tight as you want to.  You deserve that Cup and the Title, too.

And then you have Sara Errani who didn’t win but gave it 100% effort running around all over the place and trying to chase those hundred miles an hour balls coming at her every which way.  Bless your heart.   The Red Man always appreciates great effort, but then it’s Close but no Cigar in the end.   Maria was too much for your Italian spunk on the clay courts today.

The Agony of Defeat

And what was the prevailing attitude at Casa de Canterbury during the match today?

I’d say it was kinda like nobody really gives a rat’s ass except the old woman Slow.   Pretty was working and while Tennis Ball Obsessed Chelsea loves a tennis BALL, she really doesn’t care for the Grand Slam Finals on TV.   Paw Licker Annie was equally unimpressed.   Smokey Lonesome Ollie was upstairs claiming his rightful place as King of the King-sized Bed.  Spike was outside playing with his new best friend Sadie who appears to stay at our house more than she does hers.   We Party. 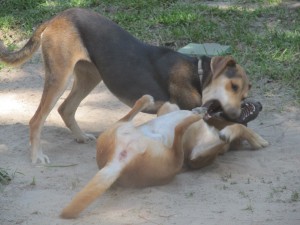 And of course, we’re not done with The French Open yet.   Geez Louise.

Get me outta here, Percy…tomorrow will be here before you know it…