Turn out the lights, the party’s over…they say that all good things must end…call it a day for Novak Djokovic and Hail to the King of Clay:  His Royal Highness Rafael Nadal!

And while The Red Man avoids any hint of Negativity whenever sports history is being made at Roland Garros in Paris, I do have to say I’m glad this particular party is over.   The old woman Slow makes me very nervous with her outbursts of emotional enthusiasm in the matches and her incessant click, click, camera clicking.   I swear the daffy old twit thinks she’s now the Ansel Adams of sports photography  and she’s not even really THERE, if you catch my drift.   Shit house mouse.

Nadal did his best Elvis Presly lip-curl imitation when play stopped again in the fourth set this a.m. for a discussion of whether too many raindrops were falling to continue the match.   I held my breath.   Please God, let this be over soon.   Don’t leave us hanging out to dry at Casa de Canterbury while it’s raining in Paris.   Even Pretty was up and watching early this morning, but that was mostly because she had to go to the Mast General Store to do the candy order before 9:00.   Pretty is in charge of Candy and nothing interferes with making sure the barrels are full of sweet goodies every week.   Not even the French Open Finals.

But the sun broke through the clouds and the rain vanished and so did the Mo for Djoko and just like that Paw Snaps!   It was all over in a flurry of red clay dust and white chalk lines.

Rafa found that The Force was with him and didn’t let a rainy day or Monday get him down.   Slow was thrilled that he won, and Pretty felt bad for Novak.   That’s the way the ball bounces at Casa de Canterbury this go round. 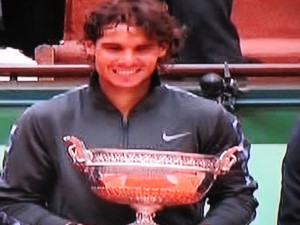 The Red Man salutes both of you Peeps for spectacular shots and incredible endurance in those LONG points, but I’m afraid I need to take a break from the sounds of the thumps of the yellow tennis balls and clicks of the camera and rest up for Wimbledon.   I suggest you guys do the same.

Turn that TV off and get me outta here, Percy…catch up with you later, Sports Fans.   Hope your week breaks a record or two on the plus side wherever you are with whatever you’re doing.