Gamecock Boys of Summer in Omaha

Well, as Yogi Berra was fond of saying – it must be deja vu all over again…unbelievable.    Matt Price is The Closer in Omaha just like Deputy Chief Brenda Leigh Johnson is The Closer for the LAPD.   He doesn’t hold a candle to her in the looks department, but he sure can throw a leather baseball across home plate and he shut down the little pigs from Arkansas last night in a nasty one.   The University of South Carolina Cocks won the contest 3 – 2 and  The Red Man says a win is a Win is a WIN  and this game was a lot more exciting than it sounds.   Yessiree, you could have cut the tension in our house in the bleacher sections.

Leave it to Pretty and the old woman Slow to stay up until all hours watching the Cocks pull it out which is remarkable for two lesbians, if you catch my drift.   Whatever.

But then they got up at the crack of dawn – literally – this morning to have one of those God awful things the Peeps do on a Saturday in June for some reason known only to them.   Yard Sale.   Sweet Jesus.   When will we sleep again?

Now surely they didn’t really sell our Gamecock Christmas Tree on the morning after a monumental victory in the College World Series.   The Red Man is appalled.   It’s a world gone mad, and those women are shameless.

So the yard sale is over, the Gamecocks play in the Championship Series tomorrow night and I hear Pretty and Slow trudging up the stairs to catch some zzzz’s.   They must be tired.   I know I am.   Good luck to everyone on finding a place to lay your weary heads tonight.   I’m not budging. 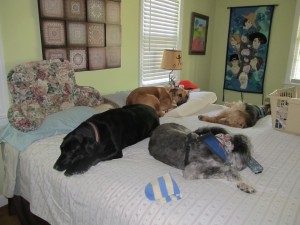 Hope your weekend is exhilarating, Sports Fans.   Get me outta here Percy…I’m resting up for tomorrow night.   GO COCKS!!