Olympic Pathletes are off and running on Day One in a medley of events.   For example, Ryan Lochte won a Gold Medal in the 400-meter medley, which is a very long swimming race where everybody swims as fast as they can in several different ways not to include dog paddling. 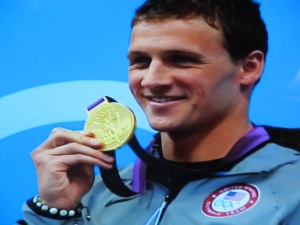 We Can’t Watch Gymnastics Either – They Make Us Nervous

Stay tuned for reliable reporting from The Red Man who has the best seat in the casa which is Spanish for house.

Get me outta here Percy, I’ve got a big day tomorrow…