Yes, yes I know…spare me the snide comments about missing Day Eight.   Hey, this isn’t a Stephanie Plum mystery series and The Red Man is no Janet Evanovich who sounds like she missed her calling by being an author instead of an Olympic gymnast, if you catch my drift.   And speaking of gymnastics, let’s give Mega Paw Snaps to Romanian Sandra Izbasa for the Gold Medal in The Vault which was evidently ultra difficult today since almost all the girls hit the mat with a thud that reverberated throughout the arena like a coyote call in a canyon. 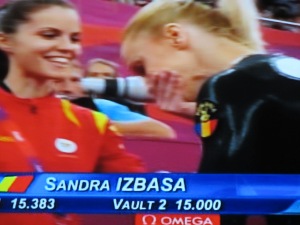 Sandra Izbasa Wins Gold Medal in the Vault for Romania 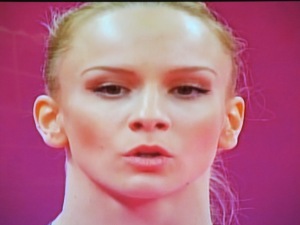 Dreams Do Come True in Magical Moments of the London Olympics 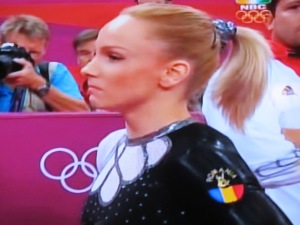 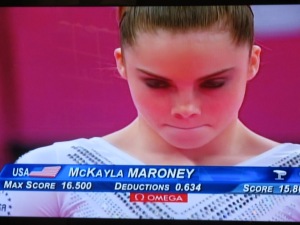 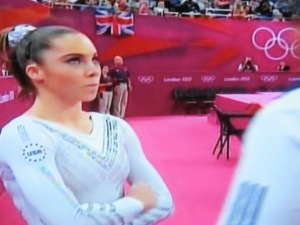 McKayla Maroney of the USA wins Silver Medal in the Vault

The Red Man sends you Paw Snaps and Twirls of Congratulations

Sometimes we snatch defeat from the jaws of victory

Ask Roger Federer and his wife who watched Roger who is King of the Grass Courts lose in straight sets to Great Britain’s version of the Second Coming: Andy Murray, who played a nearly flawless match as the Home Boy in the ‘Hood. 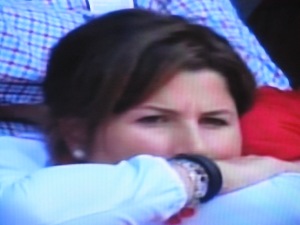 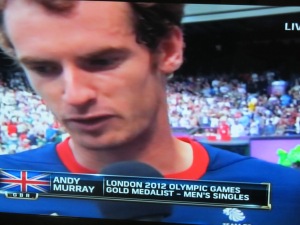 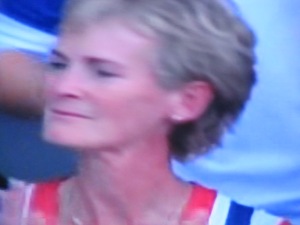 and advises you to share this Gold Medal with your mum 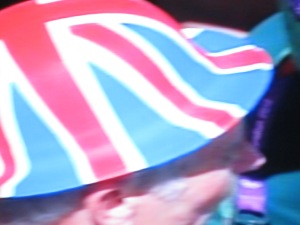 Party Hearty, Brits – You’ve Got Yourself a Winner at the All England Club on Day Nine

Pretty was torn as she watched the match from the bleacher seats in Casa de Canterbury.   She had her mind made up to root for Andy until the old woman Slow reminded her that Roger had never won a Gold Medal in Olympic Singles competition.   Well, then, you should’ve seen her face as she struggled to pick anyone over her most favorite of all times, Roger.   In the end, her Gemini nature allowed her to be happy for either man.  That’s one of the great things about being a Gemini.   You can pull for one guy and be equally glad when he loses to his opponent.   Shit house mouse.   Slow sat in the other end of the bleachers and in her own Taurus universe which never gives up on ANYTHING  she was still hoping Rafa Nadal would win.   Pathetic.

And speaking of pathetic, what was up with Team USA Men’s Basketball on Day Eight against Lithuania?   They squeaked by 99 – 94 but it was any team’s game for three and a half quarters with the lead changing as often as popularity fades which is as often as the wind changes its course.  The Red Man salutes Lithuania for playing a great game that could have been in the W column for them.   Finally, Lebron James came alive for Team USA in the last few minutes of the game to score 17 of his total 20 points or we could have heard the same loud thud we heard in women’s gymnastics from the vault exercise.    Coach K didn’t want to watch. 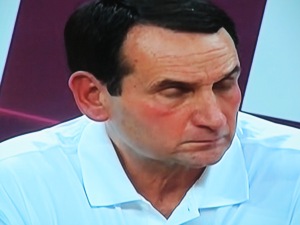 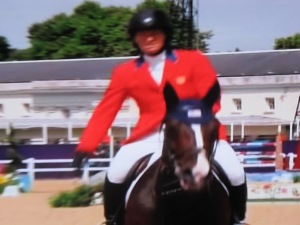 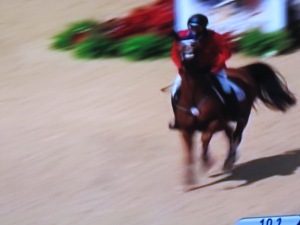 Moves On to the Third Round with Dream Ride

Hey, this Pathlete is 52 years old and he’s from Wilsonville, Oregon which might explain the way he dressed for  his first rodeo but The Red Man gives him and the horse he rode in on Paw Snaps and Barks with Twirls for never giving up on their Dreams…here’s hoping you bring home the Gold.

Get me outta here, Percy…it’s a full moon and I need to do some howling of my own…