Well, Sports Fans of London Madness, I have to say we seem to be losing Olympic Fever from some of our Casa de Canterbuy bleacher Brothers and Sisters in the Pack who have decided their nerves can’t stand the intense emotional fervor of the Olympians and they need a rest. 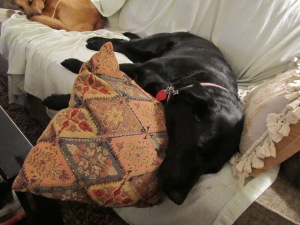 Tennis Ball Obsessed Chelsea and The Spikester Are Over the Olympics

The Chinese Team of Zhang Xi and X Ue gave Team USA in women’s beach volleyball all they could handle and then some in a semi-final match but in the end the Americans who are trying to have an unheard-of Three-Peat as the Gold Medal Girls of the sandbox came through with guts and grit and moved on to the Gold Medal round where they will play guess who?  Another American Team of Jen Kessy and April Ross, according to Bob Costas who never lies. 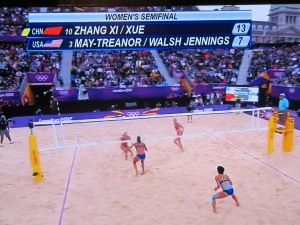 Our Program Coordinator and Ansel Adams of TV Photography, the old woman Slow, hasn’t made a smooth  transition to Track and Field Events in Week Two.   We seem to miss more of those than we catch.  However, we did see the Women’s 100 Meter Hurdle which if you’ve ever watched Pathletes leapin’ over those contraptions invented by wild and wooly Peeps who don’t ever jump them themselves you’ll be amazed at how fast they get over them and run to the finish line.   Shit house mouse.  Blink twice and you’ve missed it.

Aussie Sally Pearson Wins the Gold With an Amazing Race

OMG, please don’t tell me we have to watch gymnastics again.   TWO MORE EVENTS?   Sweet Jesus.   Pretty’s in the house and will watch with Slow who can’t stop herself from this torture, but I may have to step away from the action.  Balance Beam Final.  Painful to see.   My nerves are so wrecked I’m feeling the need to puke.   Surely these young girls may be thinking the same thing while they wait to climb aboard the beam.   Time stands still. 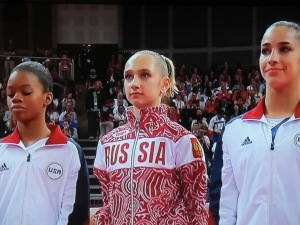 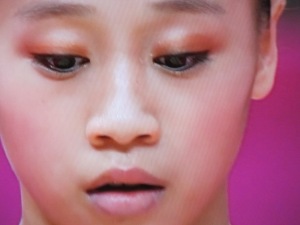 Lu Sui You Know How to Focus on The Beam 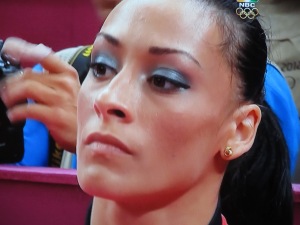 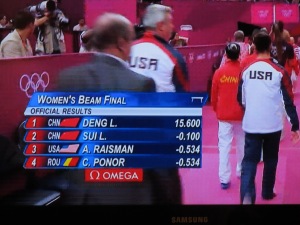 So it went down like this as far as Yours Truly can tell.   After the judges issued their original results, Team USA filed a we-don’t-like-how- this-ended-up protest and asked the judges to think twice which they did and then Catalina and Aly were tied for the Bronze but only one Pathlete can win it so it went to Aly based on overall performance.   Alrighty then.   That’s kinda like in baseball when the tie goes to the runner at first base if the ball and player arrive at the same time.   Hmm…maybe not.   At any rate, Paw Snaps to Aly Raisman for the Bronze on the Beam and then More Barks and Backflips for the Floor Exercise Gold Medal!!   Outstanding performance.

In Another Unforgettable Olympics

Adios, Aliya Mustafina – Congrats on a Great Olympics and the Bronze on your Floor Routine

Well, Sports Fans, The Red Man always tries to learn a life lesson from his experiences and I guess the best advice I can offer from Day Eleven of the Summer Olympics is avoid the hurdles and beams in your life whenever possible but if you feel yourself falling somewhere, be sure to check your balance.

Get me outta here Percy…I need to wake up some sleeping dogs who are lying around up in here in this casa…stay tuned.