We interrupt our Best of The Red Man Second Anniversary Series for these special Football Limericks:

There once was a Team called the Cocks

Who made sure that their stadium rocks.

From the West came the Big Mizzou

Who wished for a touchdown or two.

The Gamecocks roared back

There once was a defender named Clowney

Who was more than a little bit pouncy.

He blew past the line

And wasted no time

In bringing the quarterbacks Down-ey.

There once was a runner named Marcus

Who couldn’t be stopped ” irregardless.”

He ran through the defense

And came to be known as the Spark Us. 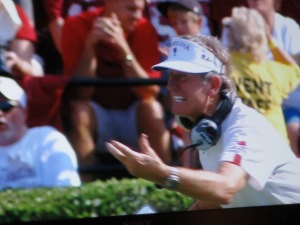 There once was a Coach named Steve

Who needed to take some Aleve.

His nerves were all shot.

His temper was too hot.

But his Cocks found the way to believe!

Well Sports Fans, The Red Man has a million of these but enough’s enough for one night.   Needless to say, Pretty and the old woman Slow are Rockin’ with the Cocks tonight and who can blame ’em?   Let the Peeps have their fun when and where they can get it and I’ll just say…

2 thoughts on “There’s Good Rockin’ With The Cocks Tonight!”