So it looks like everyone enjoyed the Lab swimming with the dolphin on our previous visit.   I mean, what’s not to like about a dog racing down a ramp to start swimming toward the middle of a harbor to play with his BFF who happens to be Dolly the Dolphin, wouldn’t you say?   Slam dunk for heartwarming, touching, moving, unusual, blah, blah, blah.   Whatever.

Well Sisters and Brothers, if you thought that was good, here’s our own version of Heartwarming for you from the Pack at Casa de Canterbury.   Never let it be said that The Red Man is less entertaining than a Dolphin, for God’s sake.  Bite your tongue.  As Paul Harvey used to say on his obsolete radio news show Here’s the rest of the story!

Once upon a time not so long ago (actually two weeks) and in a land not so far away (Fairfield County 25 miles north of Casa de Canterbury) the two lesbians Pretty and the old woman Slow decided to do what real lesbians are supposed to do and go for a hike in the country with their dogs.   Seriously, these are the most worthless lesbians in the world.  They don’t know a thing about computers and can barely figure out how to watch On Demand on their new TV U-Verse remote which is supposed to be Fool Proof.  Neither one of ’em can cook worth a damn.  Their tool box consists of a couple of hammers and two screwdrivers and they wouldn’t have those except they like to hang pictures everywhere.  But, I digress.

So EVERYONE piles in the old Dodge Dakota and I’m not talkin’  ’bout in the bed of the truck, either.   Yep, they load us up and  in my order of importance that would be The Red Man, Paw Licker Annie, Smokey Lonesome Ollie, Tennis Ball Obsessed Chelsea, Spikearoo and themselves in the cab of the 2004 pickup truck and we could’ve given a can of sardines a run for their money we were crammed so tight in that truck.  How crowded was it, Red Man?  It was SO crowded Her Highness Paw Licker Annie sat in the front seat with Slow and Pretty and the rest of us had to stand in the back seat because there was no room to sit.  Now that’s TOO crowded, Sports Fans but that’s so typically Pretty and Slow.  One for all, all for one.

So while we didn’t have an ocean with a harbor or a handsome man with a cute Australian accent describing our adventure or certainly not a dolphin in sight in Fairfield County, we did have our own version of excitement.

No dolphin but lots of debris in creek

Of Course PL Annie decides to go for a swim, too 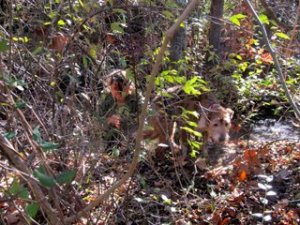 Pretty to the Rescue!

Paw Snaps for Pretty who had to climb down the bank and wade into the water to push PL Annie out of the creek and up the bank to safety – if you’ve got a Crisis, Pretty’s your lesbian of choice.  I wouldn’t bother calling for Slow.

All’s well that ends well as I am fond of sayin’ and our little hiking adventure was a ton of fun, let me tell you.  Sure we didn’t have a dolphin, but we did manage to come up with a fair amount of ticks which should count for something.

At any rate, Smokey Lonesome Ollie was the first one to the truck and waited for the rest of us.

Get me outta here Percy – I have my own Lap of Love and it’s Pretty’s…heh, heh…eat your heart out Dog in Harbor…