Ding Ding Ding – and they’re off and runnin’ for the Best This and Most Fabulous That and shhh nobody knows the results until we open the Envelope blah, blah, blah.  I’ve never seen anything like the Peeps and their Awards to themselves but I can tell you the kickoff for 2013 was this week and they started with The People’s Choice Awards.  I always like TPC because they’re kinda the poor man’s version of awards – very laid back and lots of teenagers screamin’ in the audience because apparently they are the People who Chose. 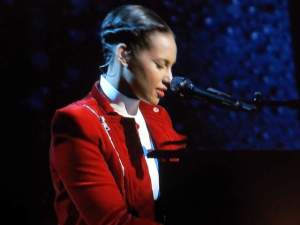 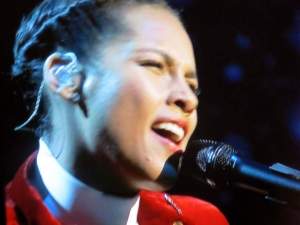 Then she sang and played at the same time

Then she sang and danced with a bunch of guys

Okay can I just tell you confidentially that The Red Man had heard the name Alicia Keyes in the past but never really KNEW her or saw her in person so he was somewhat surprised at how totally HOT she was and at how well she could sing and dance AND play the piano.   Wow.   Granny Selma would’ve been impressed with her piano-playing talent since GS used to teach piano and have recitals at the school auditorium back in the days when the only lights for the piano players were fluorescent bulbs hangin’ precariously from the ceiling.   Alicia Keyes had great lights. 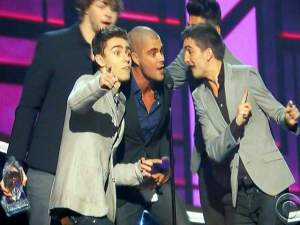 Well, a barbershop quintet named The Wanted won TPC Award for best singers in a single group and sure enough they burst into song because they were so happy they won.  They sang a cappella since it was a surprise for everyone when all they were supposed to do was thank their friends and sisters and mothers  and walk off with the trophy but it didn’t matter to the teenagers in the audience who screamed their loudest and longest for these cute boys who thought they’d won a talent contest and someone had yelled Encore.  They said they chose Afternoon Delight in honor of their best friend Ellen DeGeneres who is like the Queen of The People’s Choice Awards. (note to the wanted: change your name to something like The Platters or The Righteous Brothers or Gladys Knight and the Pips or The Everly Brothers because you’ll never get ANYWHERE with a name like the wanted.   ask anybody) 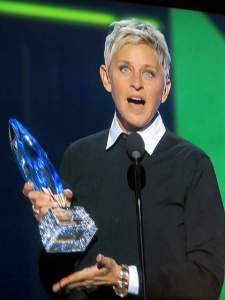 She knew what to say

So practice makes perfect as the saying goes and Ellen knows how to give an acceptance speech and did a good job while the old woman Slow beamed and glowed.  I swear she thinks whenever a Famous Lesbian gets an Award she and Pretty are winners, too.   Whatever.  The next thing you know they’ll be wantin’ to get MARRIED because Ellen and Portia are married.  Spare me from a WEDDING at their age.  Plus they’d have to go to some state like Iowa since they for sure won’t be gettin’ legal in Texas or South Carolina any time soon and I’m not interested in a road trip to Iowa, if you catch my drift.

Well, Sports Fans, so many awards…so little time…so I think I’ll sign off for the night with one last Red Man Favorite of the evening…

8 thoughts on “The People’s Choice”