Ohhhhhh….now I remember why we watch the Major Tennis Games.  Paw Snaps and Twirls!  We watched Sunday night’s action unde the lights at the Australian Open during the wee, wee hours of Sunday morning at Worsham Street in Texas.   How wee was it Sports Fans everywhere want to know?  It was SO wee I confess I dozed off and on along with the old woman Slow and Spike who really didn’t watch much of anything.  For some reason we woke up at 4 a.m. and couldn’t go back to sleep so Slow turned on the Australian Open and there we were smack dab in the middle of the Round of 16 for the men’s singles with the number 1 Seed Novak Djokovic playing the number 15 Seed Stan Wawrinka.  Should’ve been a paw snap and twirl for the number 1 Peep, right?   Not so fast, mi amigo which is Spanish for my friend. 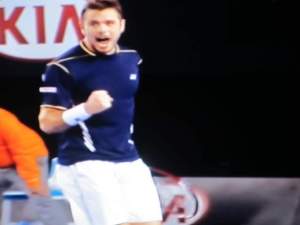 Wawrinka brought his A game 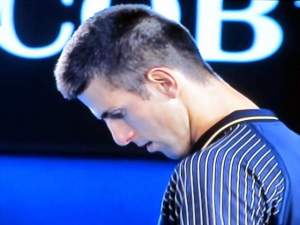 Djokovic had a lot to think about …

to force him forward  in the Epic Final Set

In the end which came Five Hours after the beginning,

The Big Winners were the Sports Fans who were there

and all of us who saw it from afar 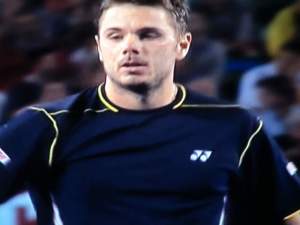 The Red Man salutes you for your Personal Best efforts

and says You’ll Be Back

And lest we disremember them, the women were playing, too.  I have to say not quite the drama as the men’s match today or yesterday or tomorrow.  Whatever.

The Red Man calls this an old-fashioned ass whipping, if you catch my drift. 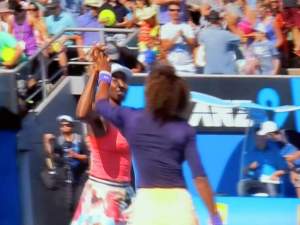 Williams Sistahs roll on in doubles over their opponents

Nadia Petrova of Russia and Katarina Srebotnik of Slovakia

Close but no cigar

Can you bring the towels?  I’m older.

And so Sports Fans, although The Red Man is focused Down Under for the Australian Open, he isn’t oblivious to what’s going on Up Over in these United States.  The new Peep-in-Chief who is also the already Peep-in-Chief will swear again in public tomorrow for the Second Inauguration in Washington, D.C.  The Red Man will be present for these ceremonies from our favorite seats at our casa on Worsham Street and will also be remembering the Legacy of another Favorite Hero of all of ours in both our casas – Dr. Martin Luther King Jr.  He had a dream, and The Red Man loves dreamers who work hard to make their  dreams come true.  Let’s hope the Peep-in-Chief will have a Legacy that good.

Shit house mouse.  Excuse moi but I almost forgot  our own Legacy in the making in Australia. Ding! Ding! Ding!   Roger Federer is the first man to win 250 Major Matches but who’s counting?  Heh, heh.    Wow – keep it up Big Man with the F on your cap.  We knew you when…

Get me outta here Percy…I think it’s time for my afternoon nap if it REALLY is afternoon.