Well, the night’s no longer young and neither am I after the 85th Annual Academy Awards Ceremony which we watched from the comfort of our home on Worsham Street. Was that really the Oscars or was it Hollywood’s version of a Talent Show?  I haven’t seen so many songs and dances since they canceled the Lawrence Welk re-runs.  Shit house mouse.

Host Seth MacFarlane sang and danced on and on and on

Even Billy Crystal never did that many songs

Dame Shirley Bassey brought the audience to its feet with Goldfinger

Who knew James Bond has been around for 50 years?

Oh yeah, and she won an Oscar for her James Bond Skyfall song 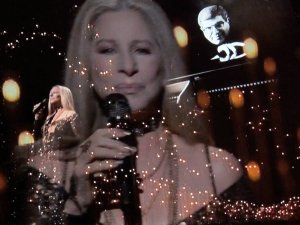 The old woman Slow sang along with Barbra

Pretty would be pleased to know she knew all the words

She didn’t have to

No singing required for his role as Abraham Lincoln

Ben Affleck was ecstatic for Argo’s win as Best Picture

Let’s just say it was a star spangled evening that saw Captain Kirk appearing live from the Enterprise to chat with Host Seth MacFarlane at the beginning of the show and First Lady Michelle Obama appeared live on the same screen at the end of the night to announce the winner of Best Picture.  Captain Kirk.  Michelle Obama.  Hey, that was how the cookie crumbled.

Pretty and Slow kept the cell phones sizzling tonight as they texted almost as often as Seth MacFarlane sang and danced.  Seriously, those two need to get a room.  Paw Snaps!  Oh, that’s right.  They have rooms, but they’re a thousand miles apart.  Let ’em text to their hearts’ content then.

At any rate, all’s well that ends well as The Red Man is fond of sayin’ and tonight is no exception.  The Oscars are done – the Award Season is officially over and we can all breathe a collective sigh of relief.  Sigh.

Get me outta here Percy…Spike and I are going to bed…oh, that’s right…we already have.

15 thoughts on “Was That Really The Oscars??”