Greetings Amigos in cyberspace. The Red Man is happier than usual to be able to talk to you from Deep in the Heart of Texas tonight.   Yessiree, we had a potential D-I-S-A-S-T-E-R at the West Montgomery County Park today and it wasn’t because the Sheriff was after us for trespassing.   Nope, I’m afraid to say I participated in a Reckless Runaway this afternoon and the old woman Slow was not amused.  I really don’t know how it all went wrong, but I think I’ll blame Paw Licker Annie and Smokey Lonesome Ollie.

Paw Licker Annie and I took off with him

Smokey Lonesome kept on running while

Slow was hollering for us to come get in the truck 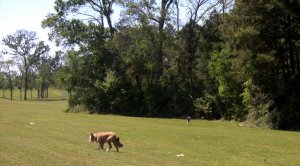 I confess I took off after them and left Slow behind

We ran through those woods like the Hounds of the Baskerville were chasing us and Slow’s calling and blowing that whistle were wasted efforts.  The horn from the Dodge Dakota got fainter and fainter to me.  I was free again.  The Red Man was a Dog on the Edge and running with the Big Dogs through perilous territory.  Paw snaps and twirls!  This was the Call of the Wild and I was answering the call!  Jack London, we dedicate this adventure to you.

Finally, we all ended up together in the middle of the woods and stopped to assess our situation.  Hmmm…now exactly how do we get out of here, I wondered.  Brother, I was so tired all of a sudden as the adrenalin of my getaway run began to fade into a wave of anxiety.  The Big Dogs didn’t appear to have a Plan.  Swell. I’d followed the wrong leader and was about to die of thirst in the middle of a wilderness.  Sweet Jesus.

I turned around and tried to head back the way we came and SL Ollie and PL Annie followed moi.  Somewhere in the distance I thought I heard the sounds of horns and whistles and I ran as fast as I could in that direction.  The Big Dogs were behind me and before long I saw the truck in a clearing with the old woman Slow standing beside it.  There was just one tiny problemo which is Spanish for problem.

We were on the wrong side of a barbed wire fence

Alas, unfortunately The Red Man’s Call of the Wild ran smack up against the trickery of civilization.  That was a helluva fence, let me tell you. 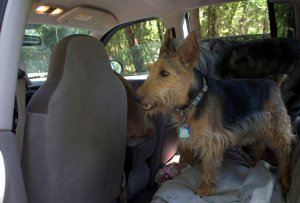 So all’s well that ends well and Slow was able to hold the barbed wire open wide enough for us all to get through, but let’s just say her attitude wasn’t exactly cheerful.  Frankly, I haven’t seen her that pissed off in a while.  We’ll have to jolly her into a better mood tomorrow.

Well Sports Fans here’s hoping your weekend is a good one.  The moral of our little story tonight is make sure you have the right leader when you follow the Call of the Wild.

Get me outta here Percy…I knew we should’ve watched The Masters this afternoon.

16 thoughts on “The Call Of The Wild”