Well The Red Man spent the afternoon watching the final round of the Masters golf tournament and he has come to this conclusion:  If your first name didn’t start with an A and if you weren’t from a  country that started with an A, you might as well throw your clubs in your bag and go home.  I kept thinking I’d see Vanna White leap from behind the leader board and say Buy a vowel, Buy a vowel!

Angel Cabrera from Argentina tied for the Win in regular play

His son Jr. was his caddy

Grandpa Cabrera knocked in some amazing putts when they counted and his son loved every minute of the celebration with his dad.  Angel Sr. won the Masters in 2009 and worked as hard as he could to find a repeat in his bag during a rainy finish.  Jr. didn’t know whether he should hold the umbrella or his daddy.

The gallery on Worsham Street had mixed feelings

Smokey Lonesome Ollie couldn’t believe it ended in a tie

But as the Fickle Finger of Fate waved to the Golfing Gods, it was Australia’s Time to Shine.  Adam Scott ended the drought for Greg Norman and a gazillion other Aussies who had tried to win the symbolic green jacket at Augusta National when he outlasted Papa Cabrera with a clutch putt on the second hole of the sudden death playoff.   The Red Man sends Paw Snaps and Twirls to Adam and all of our Aussie friends in cyberspace.  Australia Rocks! 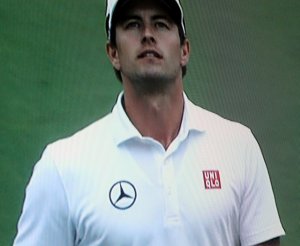 Adam thanks the Golfing Gods for the extra edge

I only caught the old woman Slow napping once in her recliner during the Marathon Match.  I can’t say the same for PL Annie.  All in all, The Red Man thought the Masters this year was a reminder of why we watch sports.  Sometimes it’s not only thrilling but downright historical.

Get me outta here Percy I need to decompress from an overdose of adrenalin…have a great week, Sports Fans and Party Hearty Down Under!