Well Amigos I’ll keep this short and sweet.  The old woman Slow took me back to Santa Vet yesterday and LEFT ME THERE and that’s the last thing I remember until I found myself staggering into the kitchen on Worsham Street this morning.   HELLO is anybody listening?  I said I lost a day of my life in a foggy nightmare with Santa Vet as the Star and Santa’s Helpers as the supporting cast and all I know is that I feel like I got hit by a Mack truck.  Seriously.

My mouth hurts like hell and my stomach was SHAVED and I’ve got these three sets of stitches that itch and  I can’t lick them because my mouth hurts too much.  I am very UNCOMFORTABLE, if you catch my drift.   WHERE ARE THE PAIN MEDS??

To add insult to injury, Paw Licker Annie made herself as little as she could and stole my own personal dog bed today.  She has no shame. 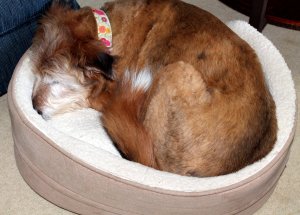 Get me outta here Percy and btw where were you when I needed you?  Catch you later Sports Fans…

P.S. Editor’s note: Red had dental surgery yesterday and had complications during a normally routine procedure.  He also had three fatty tumors removed from his chest.  He is eating and drinking today but has had a tough time. I’m sure he will keep you updated.

28 thoughts on “WHERE ARE THE PAIN MEDS?”