Well Sports Fans, it was a real nail biter but Pretty’s Pick is still in the running for the French Open men’s singles title and all of us breathed a sigh of relief along with Mrs. Federer who was sitting in the box seats and looking a little peak-ed.  Yeah, that’s what the old woman Slow says whenever somebody doesn’t look quite right.  They look a little peak-ed, she says, and Mrs. Federer saw that all wasn’t well on the tennis courts in Paris today while her husband Roger battled against Gilles Simon in the Round of 16.  And when The Red Man says battled, you better believe it was a fight to the finish. 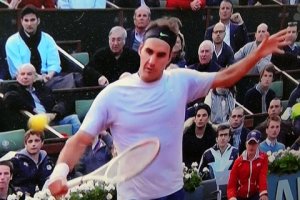 They split sets and Roger makes a valiant attempt 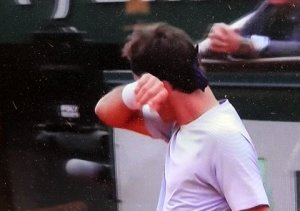 Whew – that fifth set is always the Killer

Gilles Simon almost had Roger down, but the Great One bounced back 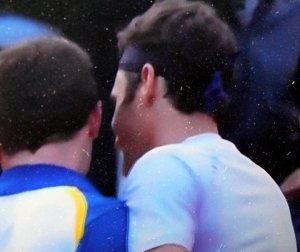 In the end Roger wins and they parted friends

Interest in this match wasn’t too high in our bleacher seats here at Casa de Canterbury since Pretty was hard at work at the Mast General Store.  Roger is always Pretty’s Pick and she loves to watch him play.

Tennis doesn’t hold a candle to squirrels in the front yard.

Tennis Ball Obsessed Chelsea keeps one eye on the French,

I need exercise, and so do you.

And while this drama unfolded in Paris, the Gamecock baseball team hosted a Regional here in Columbia this weekend and batted under the lights last night like there was no tomorrow. When Pretty got home from work, the remote was smoking from whipping those channels around from baseball games to replays of tennis matches to the end of their favorite NCIS episodes..  I was afraid we’d need new batteries before the night was over.

The Cocks won 19 to 3 over their Liberty College opponents and turns out they’ll play the Flames again tonight since Liberty took out our nemesis the Clemson Tigers earlier today.

Not to digress, but does anyone other than The Red Man find it entertaining that a conservative Baptist college would choose Flames for their nickname?  I mean when I think Flames, I’m either thinking about really gay guys or Hell.  Regardless, let’s play ball.

Get me outta here Percy…I need a disco nap before tonight’s activities…Go Cocks!!