Well Sports Fans there’s no joy in Mudville tonight because the Mighty Roger has struck out.  Oh, for God’s sake.  I’ve gotten my tennis and baseball poetry totally mixed up.  Shit house mouse.  I’m a mess.

It all started last night when The Red Man was recapping the French Open for his cyberspace friends and the old woman Slow was editing as usual but hollering back and forth to Pretty who had already gone to bed when all of a sudden Pretty stopped the conversation in midair.  I’m talking in the middle of a sentence.  I heard it myself.  Slow and I immediately got up  and went to check on Pretty and when we found her she was passed out sitting up in the king-sized bed with her freshly showered hair wrapped in her towel that was lopsided and her e-book open and lying on her stomach.  Her eyes were closed and her hands folded on her chest. Slow thought she was dead and panicked of course which is her normal response in a crisis.

Pretty, Pretty oh Pretty what’s happened?  Are you all right? OMG Pretty, wake up please wake up!  I’m so sorry I gave you Paw Licker Annie’s Xanax…I’m so so so sorry Pretty.  We’ve had that medicine too long and maybe 1 MG means different in Dog Pills so I should have never given you two…should I Pretty…

What’s this?  Do you mean to tell me that daffy old twit gave Pretty not ONE, but TWO of PL Annie’s Xanax that she’s had for God knows how long.  Sweet Jesus.

The truth wasn’t pretty for Pretty.  It seems Pretty and Slow watched the opening episode of The Killing last night and got totally wigged with the darkness and violence they sat through for two hours.  Pretty needed to get up early so she could drive to Winston Salem for a meeting for the Mast General Store and wanted to make sure she could go to sleep so Slow got the bright idea to give her the Doggie Xanax.  Those two lesbians are one pill away from disaster.

Pretty wasn’t dead, but she was knocked out.  This morning Slow had to drag Pretty from the bed and make her drink Diet Coke to wake her up for her trip.  That was one groggy chick today. She’s recovering nicely in the state of North Carolina, but of course her mellow was ruined when she heard the news that Roger didn’t survive to play another day.  Pretty loves Roger as much as Slow loves Nadal.

Meanwhile back at the ranch or on another court, Serena Williams and Svetlana Kuznetsova battled on the red clay for a spot in the semi’s.

Serena is in fine form

Svetlana had her hands full…

but her Chinese sponsors hoped for the best 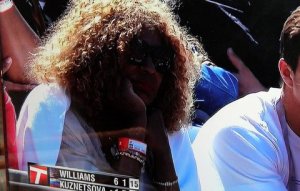 Serena wins and the Williams Family rocks for the USA

That’s the thing about tennis.  When you lose, you’re out.  Roger and Sevetlana can get in a little early extra practice on the grass courts before Wimbledon if they want to now.  Other than that, there’s no silver lining after you wash the red clay out of your shoes and prepare to leave Paris. 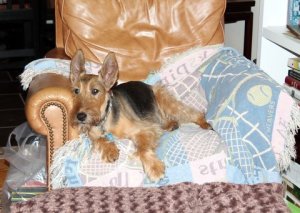 As for me, I’m just glad I’ve got the leather chair

Pretty comes home tomorrow and The French will have me up early so get me outta here Percy…I need something to calm my nerves tonight but think I’ll settle for a Rimadyl and steer clear of the Xanax…Whoa Nellie!

12 thoughts on “Adios Roger! Pretty Is A Wreck”