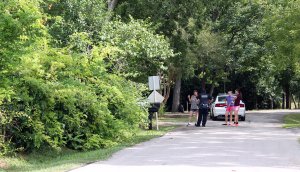 ‘Hood on the alert

Well Amigos we’ve got us some Big Excitement going on in the ‘Hood today, and I’m not just whistling Dixie. Very early this morning the old woman Slow got a text from one of the Little Women of Worsham Street (ex-officio since she moved across Highway 105 a good while back but we still count her). She was sounding the alarm about two fugitive bank robbers fleeing from the law around midnight last night here in Montgomery and  spotted at the Valero station on the corner of Highways 105 and 109 this morning at 7 o’clock.  The Valero store is right around the corner from Worsham Street.

Our City of Montgomery Policeman

As details become available, The Red Man will keep his cyberspace Sports Fans updated.  In the meantime, Pretty just called and told Slow she’s had a Gigantic Storm in South Carolina with major disasters along Canterbury – but thankfully not at our Casa.  It’s a world gone mad tonight.