OMG Pretty is on a rampage today so we’ve all run for cover and are trying to avoid the Uproar that follows when Pretty gets Up-in-Arms over a C-A-U-S-E.  Shit house mouse.   It all started last night when she went to the movies by herself after she got off work at the Mast General Store.  There’s a movie theater called The Nickelodeon right next door to the store and she went to see a movie called Blackfish.  I heard her ask the old woman Slow to go with her yesterday but Slow said she’d rather walk barefooted over hot coals than go see that whale movie.

Well Amigos, Pretty came in raving about the movie last night, but Slow had already taken a magic pill and fallen asleep sitting up in bed playing poker on her iPad so she wasn’t in any condition to comprehend the magnitude of Pretty’s outrage.  Alas, Pretty had to save the dissertation on Tillikum the orca at Sea World until breakfast this morning since it was her day off and she and Slow started the day together with TMI about the plight of whales in captivity at Sea World.  Honest to God, I know entirely too much about man’s inhumanity to whales after Pretty’s passionate rants.

Of course Slow went right along with Pretty and was horrified by the treatment of the whales in the movie and jumped on the bandwagon and moved on to her opinion of zoos and why in the world were there zoos with all those wild animals in small cages and she didn’t even like to go to zoos any more and then Pretty says that now that she’s had time to think about it the same thing was true about DOGS.

Now when she started talking about DOGS being in captivity and domesticated, I have to admit I started paying closer attention.  Yessiree, thousands of years ago dogs were really Wolves in the Wild and would still be there if Peeps hadn’t started bringing them in to their castles Pretty said.  That’s right Slow agreed as she put in her two cents’ worth about how it was really Royalty that could afford to feed the dogs and keep them inside in captivity.  Not to mention the vet bills.

At this point they both looked around at the four of us lying around on the sofa in the living room and on the floor in the kitchen and Pretty said our dogs probably just love us because we feed them.  Slow shook her head and said No our dogs truly love us and anyway none of them could survive in the Wild anymore.

Whaaaat?  Paw snaps and twirls – The Red Man had a great idea.  Another whale named Willy was freed about twenty years ago and all must’ve gone well because we never heard any bad news about him did we.  Let’s free Tennis Ball Obsessed Chelsea and Spike, too.  Let them have their emancipation from Casa de Canterbury.   That would leave moi and Paw Licker Annie who can’t live forever. 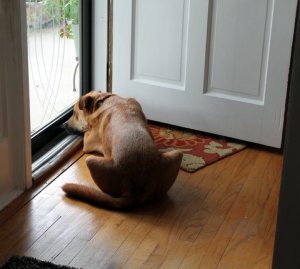 (she could stand to miss a meal or two)

So Sports Fans, the moral of this story is to avoid Pretty when she’s preaching from her pulpit because sometimes her sermons hit too close to home. And never EVER ask Pretty to go to Sea World.

Thank God she and Slow went to see The Butler this afternoon and had a good cry together.  Slow said she’d take Oprah over the Orcas any day.