Oh, for the love of Lady Gaga. Thankful Shmankful.  Well Amigos, have you ever heard so many being so thankful for so little…The Red Man is over it. 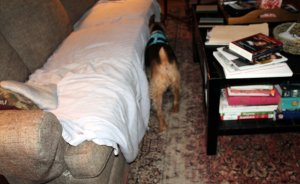 I know, I know.  Tomorrow is Thanksgiving for the Americans and everybody knows they get all gushy grateful at the drop of a Pilgrim’s Hat on the last Thursday in November every year.  Gratitude oozes throughout the country like an Exxon oil slick off the coast of Alaska.

Fast forward twenty-four hours and you’ll find them trampling each other to enter Toys R Us when the doors open at 5 p.m.  and giving thanks if they are lucky enough to get the Hottest Toy before it sells out.  Shit house mouse.  They’re a mess, but they’re my mess.

Pretty and the old woman Slow can give thanks with the best of them, if you catch my drift, and if they weren’t both sick with the Epizootey they’d be headed to Pretty’s family gathering at the First Baptist Church of Fingerville, South Carolina tomorrow afternoon.  We’ll see if they make it.  Otherwise, we’ll twiddle our paws together at Casa de Canterbury.

Did somebody say Food and Football?  Ok.  I’m thankful.

Get me outta here Percy…first comes Thanksgiving and then Whoa Nellie!  We’ll be looking slap in the face of 2014…Happy Thanksgiving to all our Sports Fans everywhere!

P.S. Thanks to those special Amigos who sent their home remedies to cure Slow’s Epizootey which she has now given to Pretty.  Unfortunately, nothing appears to be working but we appreciate the thoughts and will hope for a miracle cure in the near future.