Well Amigos, all I can say is we are thrilled for the Australian Open to draw to a close today so  we can return to our regular sleep patterns at Casa de Canterbury.  Sweet Lady Gaga.  How happy is The Red Man for the Ansel Adams of TV photography (a/k/a the old woman Slow) to give it a rest and get a life.  That click, Click, CLICK ing away and the hideous flashes that look like lightning in the darkened bedroom where Pretty is still the only one who can sleep through the noises and lights – they’re maddening, truly maddening.  Makes moi muy nervoso which is Spanish for very nervous. 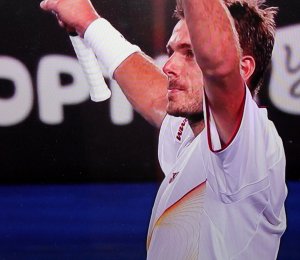 Switzerland has a winner, and it’s not Federer

There was weeping and wailing and gnashing of teeth in the darkness of Casa de Canterbury in the wee hours of the morning today as Slow’s personal favorite Rafa lost to Stan Wawrinka in four sets.

Here’s how it all went down:  Pretty got the old woman Slow up at 3:30 a.m and then went promptly back to snoozeland.

Slow let me and Spike and Tennis Ball Obsessed Chelsea out in the back yard for an unscheduled constitutional at that ungodly hour which unfortunately led to Spike’s jumping the fence and running away for a nocturnal adventure at which point TBO Chelsea was so wigged that she thought it was time to eat.  Oh, well.  She probably would’ve thought it was time to eat anyway.

After convincing TBO Chelsea no food was coming to a bowl anytime soon, Slow went back to Clicking and The Red Man joined Pretty who continued to snooze. 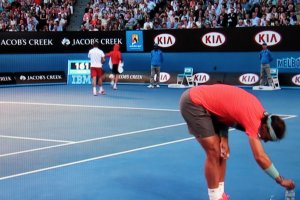 Rafa Nadal is Slow’s favorite tennis player of all time and he was down a set and a break in the second set when he knocked something out of whack in his back and thar she blew for the match.  Woe was Slow.

At this point Slow decided to fire up the old Dodge Dakota pickup and drive around the neighborhood to look for Spike who had been gone for an hour.  TBO Chelsea and moi watched in horror from our front door as she drove out of sight.  She doesn’t see that well in the day and her night vision is a joke.  We held our breaths. 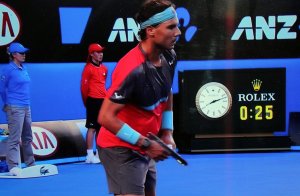 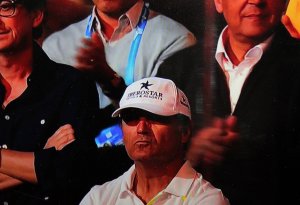 Even Rafa’s Coach Uncle Toni knew it was over

Lo and behold, not too long after she’d left, here came Slow pulling into the driveway and Spike was running alongside the Dodge Dakota pickup.  He gave a final flying loop around the front yard and then dashed to the door as Slow walked up the steps to open it for the Prodigal Son who had returned home unscathed but in Big Trouble. 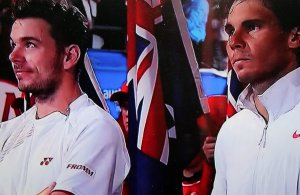 at the trophy presentation ceremony

The picture is worth a thousand words 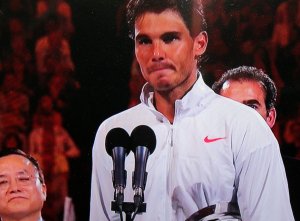 Thank you very much

Nadal fought back tears in his remarks

as President of Kia and Pete Sampras listened 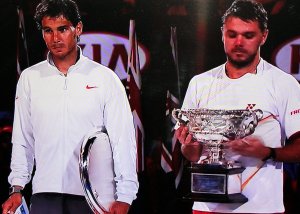 By the time the match and ceremony were over, Spike was out of the Dog House, Pretty continued to snooze, Rafa and Stan were considerably richer and TBO Chelsea had been fed so all’s well that ends well, as The Red Man is fond of saying.

We are pleased to report that Li Na of China won the Women’s Singles Final yesterday with Dominika Cibulkova of Slovakia as runner-up.  Paw Snaps and Twirls to these and congratulations for winning equal prize money as the men.  Thank you, Billie Jean King.  We apologize for our lack of pictures for the women but alas, our coverage is not as thorough as we hoped it would be.

We are considering replacing our photographer/editor for the French Open.  Applications are now being accepted.  Please contact The Red Man directly in the Comments area.

Whew.  The Red Man needs a nap.  Paw Snaps and Twirls to all the players and the 4,500 tournament volunteers that gave us this year’s Australian Extravaganza!

15 thoughts on “Stan is THE Man Down Under”