Well Amigos so much has floated through cyberspace this week about the 2015 Academy Awards already that The Red Man has been trying to sift through the sound bites and social media posts to keep his head from spinning perilously out of control.  Sweet Lady Gaga – oops…I do believe I saw her in person at the Oscars.

The hall was alive with the fiftieth anniversary Sound of Music tribute performed by Lady Gaga in a beautiful gown and amazing red rubber gloves.  She sang great but the red gloves and tattoos made me nervous. 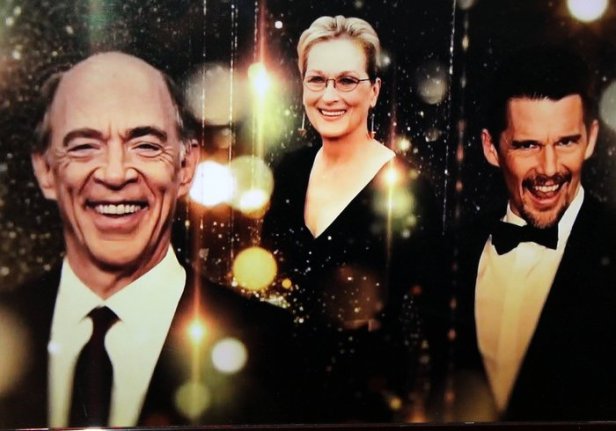 Paw Snaps and Twirls to J. K. Simmons who won Best Supporting Actor – The Red Man remembers him with great fondness from his days on The Closer. Come back, Deputy Chief Brenda Leigh Johnson – The Red Man misses you every Monday night!

Julianne Moore won Best Actress for Still Alice. It was her fifth nomination – so we send Paw Snaps and Twirls to her for hanging in there. Sometimes you have to kiss a lot of frogs…

The sets were spectacular and NPH was okay, but we missed Ellen.

Another highlight was John Legend who won an Oscar for his song Glory from the movie Selma – Paw Snaps and Twirls to John and his music – The Red Man loved it. Pretty and the old woman Slow loved the movie. 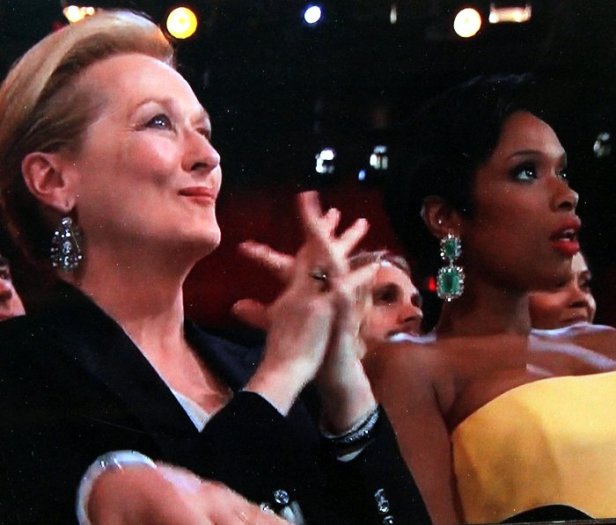 Meryl loved the song, too – Jennifer Hudson couldn’t believe she wasn’t in the choir.

Rosamund Pike was nominated for Gone Girl, but she lost.  Alas, only one winner per category.The Red Man wonders if her friends call her Rosie? 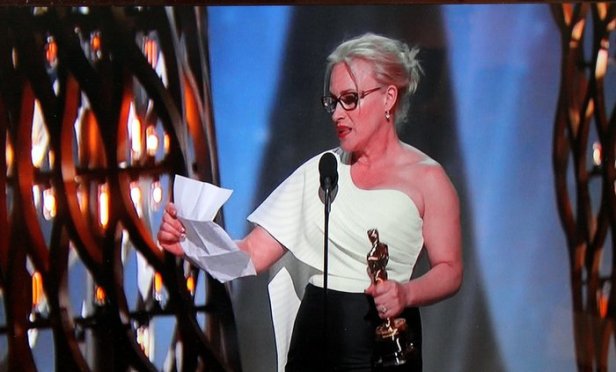 and Meryl jumped up and cheered right there at the Oscars…

Dakota Johnson brought her mother Melanie Griffith who is the daughter of Tippi Hedren (remember Hitchcock’s The Birds ?) and wished she had left mom at home.  Oh no, they didn’t…oh yes, they did.

Best Supporting Actress nominee Laura Dern brought her dad actor Bruce Dern who was nominated last year. They were all smiles – not a nasty word to be heard.

Despite spectacular sets, awesome musical numbers and memorable acceptance speeches the 2015 Academy Awards Show slipped 16% in the ratings while the Grammys dropped 25.3% and the Golden Globes viewers were down 19.3% according to our anonymous sources. Never fear – the Twittersphere was trending out of sight for the live streaming of the Awards Shows and the glitter geeks were in High Heaven.

Paw Snaps and Twirls to the winners AND the losers including Slow and Pretty’s Perennial Pick Meryl Streep.  As for The Red Man, I think I’ll stick with the Divine Miss P. who won Best in Show without glitter or tweets.

Get me outta here Percy…I hear Pretty’s in the house today…I’m sure she needs my help in whatever project she’s undertaking.