Well, Sports Fans, don’t bother looking for the red, white and blue colors to be flying in victory at the US Open tennis tournament women’s championship match tomorrow in Flushing Meadows, New York  because it won’t be waving there. That’s right. The number one seed American Serena Williams and the number two seed Romanian Simona Halep were eliminated by a pair of unlikely Italians in today’s semi-final matches.

The number twenty-six seed Flavia Pennetta defeated Halep in the first semi-final match and the unseeded (which in tennis terms means you are so far back you don’t have a snowball’s chance in hell of winning) Roberta Vinci upended Serena Williams in the second one. As a matter of fact, most fans were mildly surprised by Halep’s loss; but whoa Nellie! the earth rotated on a different axis when Serena lost to Roberta.

The Red Man felt the world tilt as he watched from the bleacher seats at Casa de Canterbury with hardcore tennis fans Pretty and the old woman Slow and the lesser TV sports enthusiasts Tennis Ball Obsessed Chelsea and Squirrel Chaser Spike – both of whom would rather be outside in the fresh air actually doing something than inside the casa watching somebody else do something.  That’s just the way we roll – we can’t please everyone all the time so some of us have to learn to deal with disappointment.

Speaking of disappointment, Serena must be totally outside the acceptable range of frustration with the college of hard knocks tonight but has to tell herself that’s the way the yellow ball bounces sometime and she will have to bounce back from this setback. On the other paws, Roberta Vinci and Flavia Pennetta and their coaches are probably celebrating big-time over their combined good fortunes and wondering which Italian woman will swing the winning racket in the final. 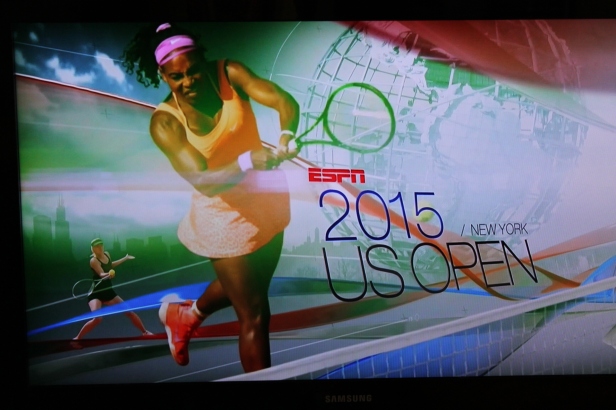 The Red Man sends Paw Snaps and Twirls to Flavia and Roberta for their victories today and says may the best Italian win tomorrow!

He also sends Paw Snaps and Twirls to Serena for her life-time tennis achievements and for coming oh, so close, to joining another elite club today with a Calendar Grand Slam. Better luck next year.

Get me outta here Percy, college football Game Day plus US Open tennis tomorrow…hm…is it possible to overdose on sports…enjoy your weekend, Amigos, and may all your favorite teams win unless they are playing the Gamecocks or the Longhorns.