Investigative Reporter The Red Man has reported on the Case of the Missing Baby Jesus from the Nativity Scene at the Church Organist’s Church in Navasota, Texas every year at Christmas since December, 2011. Here are a few of the highlights of this shocking Cold Case:

Apparently one of our most faithful followers known as Church Organist (he is also the old woman Slow’s first cousin) plays his instrument at this small picturesque church in the sleepy little town of Navasota where Slow was born a millennium ago. Church Organist had been playing there for many, many years without any problems and certainly no major crimes until 2011 when his brother was hanging around outside the church before the worship service – you know, rolling a cigarette from his can of tobacco and all – and happened to wander by the outdoor Nativity Scene. Of course, everyone knows the Nativity Scene is supposed to look like this…

Church Organist’s Brother a/k/a the Bearded One looked down at their Nativity Scene and saw right away the Baby Jesus was missing. Gone, baby gone. He passed along this news to the Church Organist after the service who then told him the Baby Jesus had been stolen the week before. Lifted right from the arms of the Mother Mary and now the other figures gathered around under the stable roof and looked down at… nothing. Stolen from the church Nativity Scene, to which the Bearded One responded that whoever stole a Baby Jesus away from a church would surely burn in hell.

To make matters worse, the following Wednesday night at prayer meeting, the Minister confessed he was in cahoots with the Decorating Committee and that the Baby Jesus had really been stolen the year before and the Committee had voted to put the Nativity Scene up without Baby Jesus anyway because there was a good chance nobody would even know he was missing. No one looked too hard at the particulars, they thought. Clearly, no one had until along came the Bearded One with time to kill before the Sunday service. The plot thickened, and the cover-up had several layers.

In 2012, The Red Man reported the Baby Jesus was still missing from the church Nativity Scene and the Wise Man’s leg had been broken off, and he was now lopsided as he stared down at the empty manger, according to the Church Organist who is our secret informant in the church.

But in 2013 all hell broke loose when the chairman of the church Decorating Committee left his wife and ran off with another woman in the congregation. He hadn’t had either the time or the inclination to pursue the Case of the Missing Baby Jesus because he, too, had gone missing. The manger maintenance disappeared, and the Nativity Scene crumbled from the weight of an ice storm as the Decorating Committee focused that year on the indoor poinsettias.

Last year, 2014, Church Organist again brought up the disgrace of the Missing Baby Jesus during a church prayer meeting, and the Minister said oh well, they wouldn’t worry about that this year because the Baby Jesus wasn’t really born at Christmas anyway. The Decorating Committee voted to place one of the sheep in front of the Wise Man with the broken leg which now had a massive hole in it. The roof was in tatters, but no funds were allocated to fix it or pursue the Cold Case of the Missing Baby Jesus.

And so Amigos, we come to the time of year in 2015 when the little church in Texas sets up their outdoor Nativity Scene. We would like to report a new Nativity Scene was in the budget for this year so that the fiascoes of the prior years could be forgotten. Unfortunately, we can’t report that because now our secret informant the Church Organist has gone missing. We are unable to contact him at this time because of his deep cover while he’s very busy playing the Christmas music on the organ.

We will update when he gives us the inside scoop.

Please stay tuned and try to maintain your sense of humor if you run into Santa…go ahead and have your picture taken with him because that makes him happy. It’s the little things that count…or so The Red Man has heard. 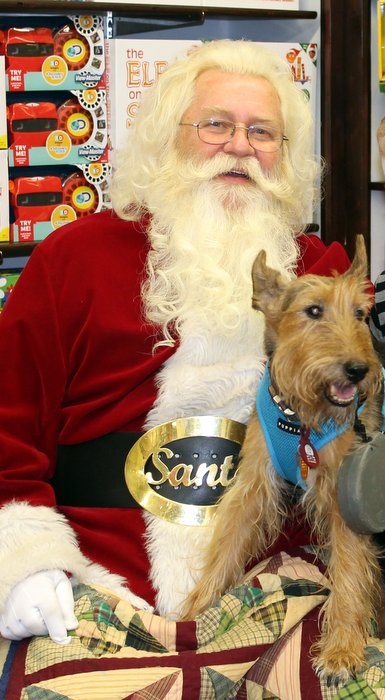 Get me outta here, Percy…I’m a dog looking for some nog…