Well Amigos, the Red Man has a bird’s-eye view of Casa de Canterbury from his perch at the Edge in the Middle which is apparently where he is going to be for the foreseeable future. Sweet Saint Peter – forget about the streets of gold and all that poppycock. I haven’t seen the first gold street anywhere. The afterlife ain’t what it used to be since the price of gold took off and the Big Dawgs couldn’t bring their portfolios with them. Sigh.

The best thing I can say about being stuck in the Middle is that I’ve got a lot of company and a ton of gossip. Paw Licker Annie and Smokey Lonesome Ollie are able to visit Tennis Ball Obsessed Chelsea and moi from the Top whenever they feel like it so there’s been a reunion of the Casa de Canterbury Pack right here in the Middle with tongues wagging as fast as tails. Annie never licks her paw anymore because it’s healed up perfectly if you can believe that – which gives her more time to chat. It’s like she can’t shut up. She told me Sassy, the Old One from the Spring Valley days, had been moved up to the Tip Top…probably because she’s the only one of us to be “registered.” Well, lah-tee-dah.

When we do all get together, our favorite pastime is checking in on Casa de Canterbury and the two lesbians and Squirrel Chaser Spike plus the new dog Charly who must think she’s landed in a Fresh Hell called Sports at her new home. She might as well relax and enjoy it because she’s in for an eternity of watching bouncing tennis balls and basketballs…and baseballs and footballs and any other balls ESPN chooses to send over the TV airwaves. Great balls of fire. 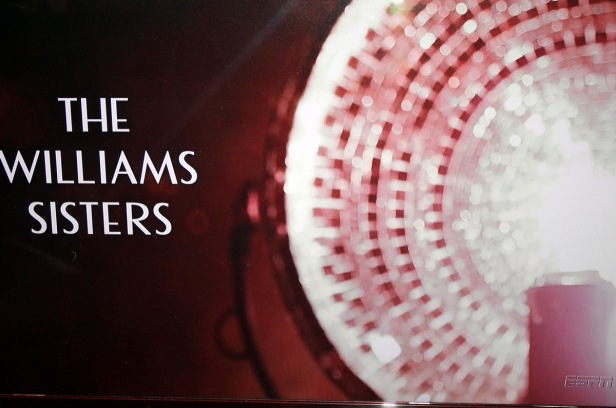 How long has she been watching Venus and Serena Williams play tennis on the grass courts of Wimbledon – since they were teenagers and she was worried about turning fifty. Heh, heh. That would be nearly two decades ago. Yikes. That’s a lot of balls flying around.

The Williams Sisters played doubles this afternoon in the quarterfinals after both of them had played in the singles semi-finals earlier this morning. It was the first time since 2009 that both sisters had reached the semis at Wimbledon. As predicted, Serena moved on to the finals and well, Venus didn’t. Their doubles match today was a scary one.

What do you think we should try next?

I’m not sure – just try not to hit me when you’re serving. 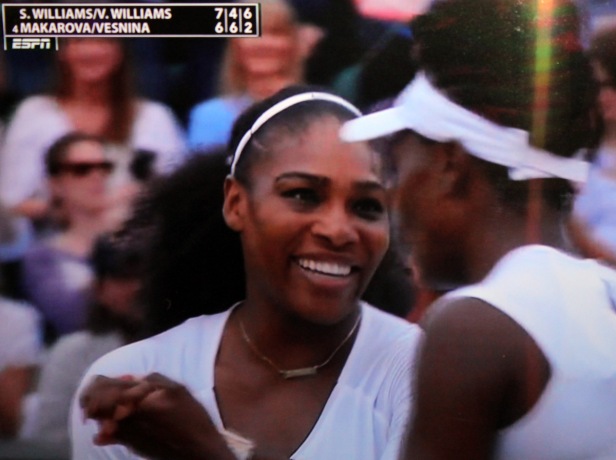 Let’s do that little twirl we like to do when we win, want to? 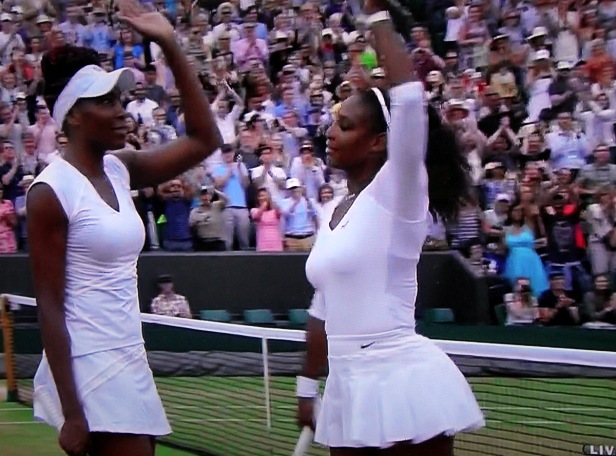 The Red Man salutes Venus and Serena Williams and sends Paw Snaps and Twirls all the way from the Great Beyond because, as Chris Evert said during the pre-Wimbledon commentary early, early this morning, “The Williams Sisters have represented American tennis so well…they have held up the American flag for over two decades. Not only are they great tennis players, they are loyal and patriotic citizens.”

Australian announcer Darren Cahill said,  “The sisters have gone beyond tennis. They’ve gone beyond sport. What they’ve stood for over time has really changed the game, much like Billie Jean King did back in the day when she stood up for equal prize money and women’s rights.” Wow. That’s high praise from the ESPN folks.

All’s well that ends well, as the Red Man is fond of saying. Annie and Ollie have grown weary of tennis and started their ride toward the Top. They promised to visit again this weekend for the ongoing Wimbledon excitement at Casa de Canterbury. Chelsea has wandered off in search of food which she can eat and eat and eat and never gains weight – it’s some kind of special diet called manna which she says is delicious.

I think I’ll hang around a little while longer to see what that glad-to-be-bad dog Charly has in store for Spike tonight. It’s not like I’m on any kind of schedule, if you catch my drift.

Catch ya later, Sports Fans. Have a great weekend on Earth.