The Old Woman Slow who is now older than dirt but vows her mind is still sharp as a tack is from Richards, Texas – a place she remembers fondly with a childhood full of family fun and love…ad nauseum.  (She’s even written books about Richards and her childhood to prove her point.) As if.

The Red Man wasn’t there so of course has no way of knowing whether her Texas tales are true or not, but one of her favorite sayings I heard more than once in the bleacher seats at Casa de Canterbury in the terrestrial realm was Well, you can take the girl out of Texas but you can’t take Texas out of the girl. She thought that was hilarious and never missed an opportunity to laugh at it like it was the first time she’d ever heard it. Shit house mouse is one of my favorite sayings, but I reserve it for appropriate moments and never bark at it anymore. Just sayin.’

As The Red Man watched day seven of the Rio Olympics from The Edge of The Middle with the rest of his buddies waiting for the next upgrade, I thought of Slow’s motto when I saw Simone Manuel from Sugar Land, Texas and Simone Biles of Spring, Texas win Gold Medals in swimming and gymnastics. My slightly modified motto is  Go ahead and take those two girls out of Texas and send them to Rio! They live in towns just 44 miles apart on different sides of Houston and somebody had the good common sense to send them to the Olympics for Team USA.  Thank Sweet Lady Gaga and Saint Peter at the Pearly Gates for any help along the way. These Texans were up to the competition. 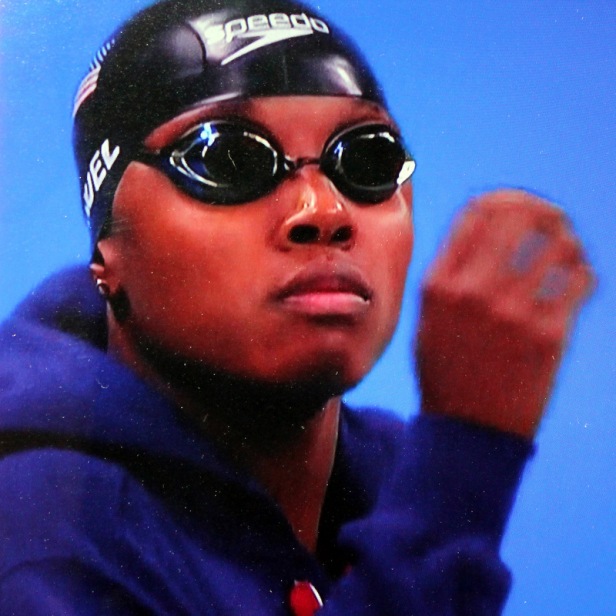 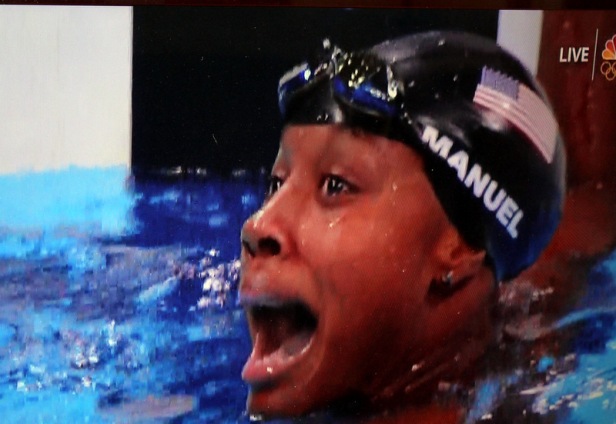 I won for those who came before me –

and for those who will come after me

First black female swimmer to win a medal for America!!

That’s how winning looks and feels in the Olympics, and this is how the Olympic Spirit moves and breathes. One of the Campbell sisters from Australia who didn’t win a medal at all was the first one across the rope to congratulate Manuel for her historic win. That’s a touch of class.

The Red Man sends Paw Snaps and Twirls to Simone Manuel for her Gold Medal she won in the blue waters of the Olympic pool in Rio de Janeiro. Jubilation broke out in Casa de Canterbury for your historic win – we salute you for your courage and conviction that you could do it.

The Red Man also sends Paw Snaps and Twirls to the tiny other Texan named Simone who won the Gold Medal for the all-around in artistic gymnastics on the same day. You reached for the sky on the uneven bars and twirled like yours truly when he’s seen the Evil Postman on the beam – and took our breaths away with your poise and overall passionate performance. You are the BEST! Stand short and proud.

On the other hand, Pretty and Slow were horrified by one of their other favorites on Team USA for the women’s gymnastics.

What’s wrong with this picture?

Gabby Douglas has been a favorite of everybody at Casa de Canterbury and The Middle for the Olympics in London in 2012 and again in Rio this summer, but girl, unless you were physically restrained by Secret Service members who had tied you to your  seat when two of your teammates won Gold and Silver Medals in the all-around competition yesterday, you’d best get yourself up on your feet and clap for them. From my vantage point on The Edge, it’s a sign of un-Olympic Spirit – and that hurts us all.

Finally, to humor the Old Woman Slow who adores Rafa Nadal, he appeared to be ecstatic when he and his doubles partner Marc Lopez beat the Canadians and advanced to the medal round for an opportunity to add to his Olympic medals. 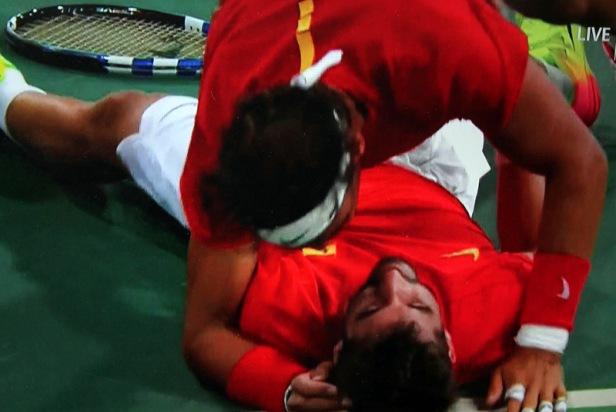 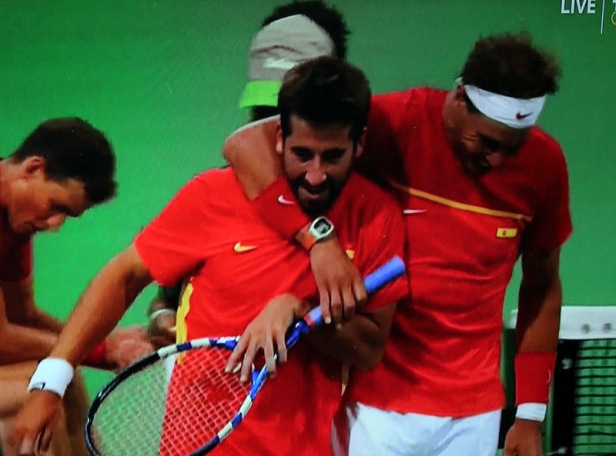 Good luck to Rafa from your faithful followers!

Well Sports Fans, you never know what The Red Man might catch up with from The Middle so you better stay tuned and have a great weekend whether you’re in Rio or wishing you were there.