Hello from Rio, Amigos! The Red Man is watching from up, up and away at The Edge in The Middle which is a stepping stone to greater glory but so far I haven’t reached the next level – something about behavioral issues. Go on with your Bad Self, Top Dawg, but you know what they say about pooches that live in gold mansions – beware of the Heavenly  Hackers.

But in the midst of dreaming about gold that isn’t in mansions,  I saw the blue waters of the Olympic pool in Rio de Janeiro take center stage again on Day Eight with the first Gold Medal EVER awarded to the city/state of Singapore – going all the way back to 1948. Joseph Schooling, a twenty-one-year-old University of Texas student who left his home in Singapore when he was fourteen years old, set a world record and came away with the Gold Medal in the 100m Butterfly. 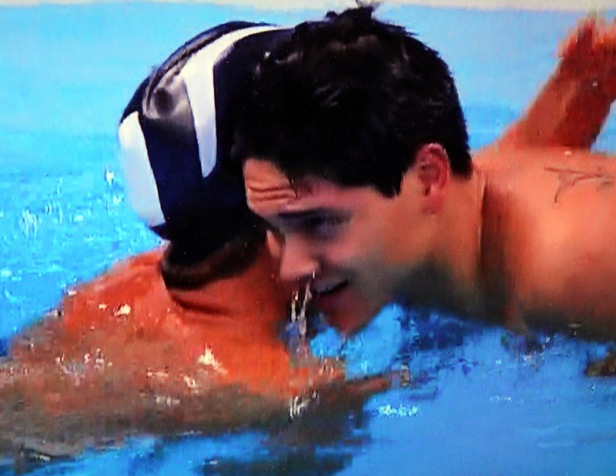 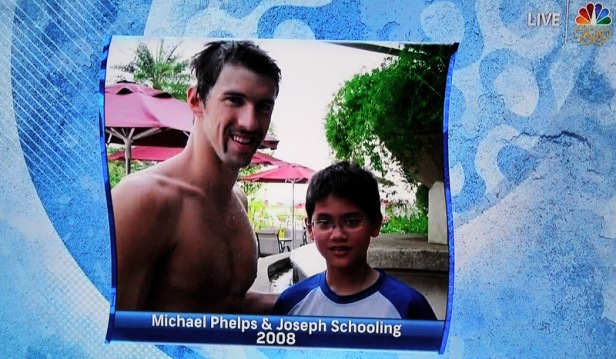 Not Michael’s first encounter with Joseph

they met in China when Schooling was a teenager in 2008

but it was in a three-way tie for the Silver

while Schooling beat his idol for the Gold

An unusual sight at a Medal Ceremony –

with not one, not two, but three Silver Medalists below him

Also overheard at Casa de Canterbury last night was Pretty’s entertaining pop culture trivia news to the Old Woman Slow that Singapore was paying $743,492.42 to its first Gold Medal winner as an additional incentive to any enterprising athlete who won and Holy Moly – looks like Schooling had more to smile about than the Gold Medal he was holding at the podium. Slow was so shocked at this news that she had to do a fact check on Pretty, who was as usual, right. Shit house mouse. The Olympics ain’t what they used to be.

The Red Man sends Paw Snaps and Twirls to Joseph Schooling for his stellar performance in the 100m Butterfly event, although he is somewhat embarrassed to mention this recognition in the same breath with the $743,494.42  prize money from Singapore. Seriously.

As for Michael Phelps, looks like he takes his final swim in 2016 tonight – and he says that’s the end of his Olympics for real. The Red Man has never been a huge fan of Sir Michael who will surely be Knighted for his otherworldly feats in the swimming pool, but he scored major points with moi last night with his reaction to his teammate Maya Dirado’s Gold Medal in the women’s 200m backstroke. 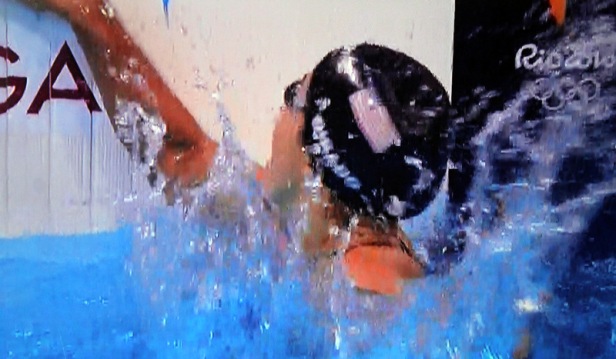 but Katinka Hosszu of Hungary was stunned 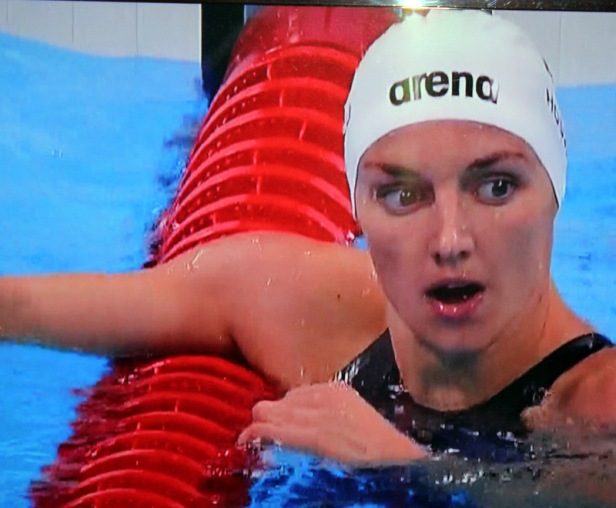 Whaaaat?  Silver? I was supposed to win Gold!

The Red Man sends Paw Snaps and Twirls to Maya for the Gold and Katinka for the Silver in this very difficult sporting event. It was a squeaker as are most of these Olympic games including the game of tennis which saw the disappointing result for the Old Woman Slow’s Most Favorite of All Tennis Players in the Whole World Rafa Nadal in today’s semi-final  match with Juan Martin del Potro .

It was del Potro in a squeaker –

a thrilling tiebreak in the third set

The Argentinian was exuberant 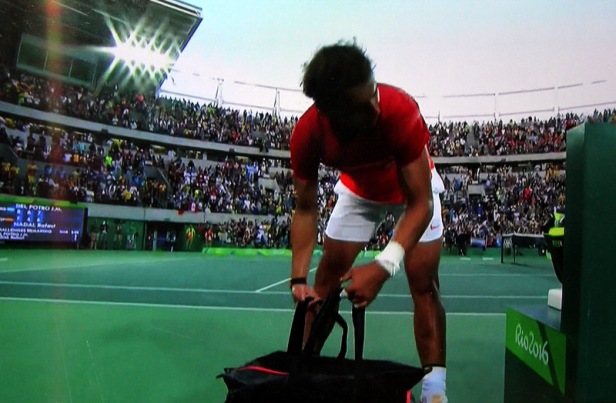 Nadal gave it his all – but it wasn’t enough today

he’ll play for the Bronze tomorrow

Last night, however, The Red Man is happy to report that Nadal and his doubles partner Marc Lopez won a Gold Medal for Spain in another exciting match – this time against the Romanians who were fighters to the last point. Honestly, I’m not sure how much more Slow’s nerves can take with Nadal, but she keeps the bleacher seats at Casa de Canterbury tuned in and turned on to his matches while Pretty breezes in and out with her Facebook Olympic updates. They’re a pair, if you ask me – which nobody did.

The Red Man sends Paw Snaps and Twirls to Nadal and del Potro for their most passionate play today which is the true Spirit of these Olympic games. Good luck to both in their medal quest tomorrow.

Finally Sports Fans, The Red Man sends Grrrrrowls and Snarls to the Team USA goalkeeper who shall remain nameless for her shabby sportsmanship after the team loss against Sweden that eliminated them from the Olympics. Boo hiss to you – The Red Man is humiliated for you and for how you reflect on your teammates and your country. Remember Granny Selma’s motto when she was in her right mind: if you can’t say something nice about someone, don’t say anything at all.

Whew. That’s a wrap – these Olympics are killing me – heh, heh, my little Middle humor for the night.