Well Amigos, The Red Man has been in spasms of laughter from peering over The Edge up here in The Middle down below to Casa de Canterbury on Mother Earth…that new little dog Charly is a chip off The Red Man’s block and will carry on the great tradition of quick getaways and reckless running from the clutches of the Old Woman Slow and Pretty. The first escape occurred this past week.

Pretty was recovering from her knee replacement surgery ten days ago and hadn’t been able to maneuver her way downstairs so Slow was solely responsible for looking after Squirrel Chaser Spike and Charly.  Early one morning I saw her open the front door of Casa de Canterbury to retrieve a bag of ice in a cooler on the porch when whoosh! Spike pushed past the  old woman to chase a squirrel running around in the front yard and that was the opening Charly needed.

Quick as a wink, the little dog was off and running to catch up with Spike who was surprised to have company – surprised and thrilled evidently because the squirrel ran up one of the gigantic pine trees and was out of sight but too late – the dogs had left the yard and were dashing around in the neighbors’ yards – flying madly about with all the freedom that fleeing from a safety net enjoys. Whoopee!!

Well, Slow started yelling at Charly to come back and Charly did, to her credit, make a retreat toward Slow and the casa but then caught herself and with a backward glance at the commotion on the front porch decided to stay with Spike and ignore Slow’s pleadings. Smooth move, I thought, as I watched the drama unfold. I was in hysterics by this time.

Then it got really good when a late-model SUV made an illegal turn onto Canterbury right in front of the house. The driver slowed down when she saw the two dogs playing in the street, thank Big Dawg for small favors. However, the bad news is Charly is a Car Chaser (hey, nobody’s perfect)  and as the car picked up speed, so did she. I mean, she lit out after that car like the Hounds of the Baskerville were after her.

So what did Spike do? He who had never chased a car in his life took off after it alongside Charly. The car kept going faster to try to outrun the dogs, and Charly and Spike were flying along beside it.

As you can imagine, Slow was hollering all kinds of pleas like I’ll get you a treat, I’ll get you a treat and Who’s hungry, who’s hungry, etc. because the little dog Charly loves food as much as Paw Licker Annie and Tennis Ball Obsessed Chelsea did. But that ship had sailed. Those two dogs were already out of her sight past the bend at the next corner lickety-splitting as fast as they could run.

Looking defeated, Slow went back inside the casa to get the keys to her truck so she could ride rather than walk to find them. The poor old thing was moving at a snail’s pace since that was the best she could do, but she finally made it to the truck in the driveway and climbed in. She was huffing and puffing and muttering obscenities by this time as she put the keys in the ignition and cranked it to life.

At that very moment the two dogs moving at warp speed came flying through the path between the azaleas that formed the boundary between our yard and the next-door neighbor’s yard. Charly led the way with Spike following close behind as she raced up the steps to the front door in a frenzy and started barking feverishly as if to say Let me in, let me in this second…I’m hot and thirsty…it must be a hundred degrees out here.

Well, Slow got out of the truck and continued her hollering but changed to Stay there, stay there, stay there. Honestly, if only I could have had a video camera with a really long zoom lens to capture the high drama that unveiled before me. We heard the commotion all the way up here in The Middle.

All’s well that ends well, as The Red Man was fond of saying when he was earth-bound, and luckily this incident had a happy ending. Turns out that, unlike moi who never willingly returned from an escape but always had to be rescued by the kindness of strangers, Car Chaser Charly is only interested in the thrill of the chase and the certainty of her food chain.

So she returned to the welcoming arms of Pretty and the frayed nerves of the old woman Slow. She’s not what they hoped she would be, but her one redeeming feature was she’s just so stinking cute. 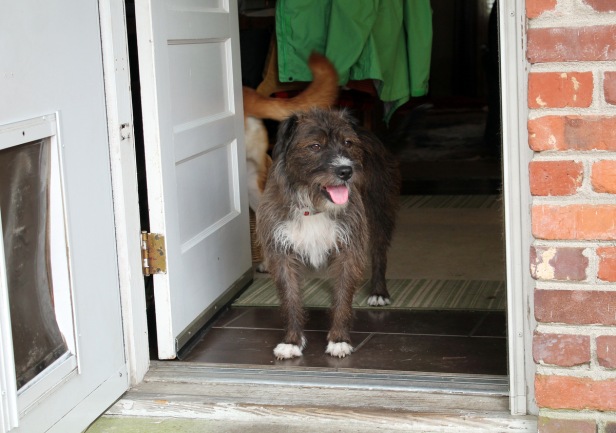 6 thoughts on “Oops! She’s Not What We Hoped She Would Be”