So Week One of Wimbledon has come and gone and you clearly had your winners and your losers.   The old woman Slow is whining and moping and carrying on about her favorite Nadal who didn’t survive the week.   Major Upset on the grass courts in London and huge disappointment for the entire Nadal familia which is Spanish for family which is their language of choice since they’re all from some island in Spain.   The Red Man sends his condolences which is English for sympathy and knows that El Rafa will return and don’t you doubt it for a minute.

We also said farewell to our American version of Wimbledon Wannabes in the person of Andy Roddick.   Pretty and Slow hate to see you go, but The Red Man thinks it may be time for you to think about hanging up your balls, if you catch my drift.   I’m just sayin’. 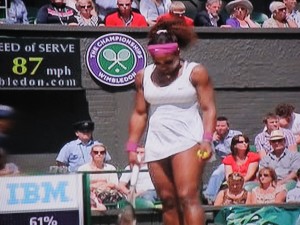 On the other hand, Serena Williams overcame nerves and a good opponent yesterday to advance to the round of 16 on Monday.   Dustin Hoffman was sitting in her box behind her sister Venus so imagine the embarrassment if she’d lost.   Never fear, Serena is here.

So Pretty isn’t a fan of the Williams Sisters which is strange since they have the same last name that she does.   But that’s Pretty for you.   She never lets a little thing like a name similarity force her to like you if she doesn’t want to.

The rest of us can take her or leave her. 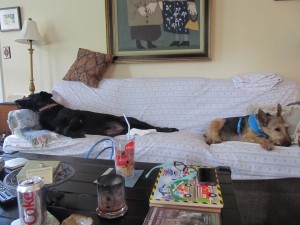 Well, Sports Fans, looks like Pretty will be working all day at the Mast General Store so if you drop by for some candy or something, be sure to give her a hug from her favorite which is always The Red Man.

Slow is going to Casa de Uncle Dick and Uncle Curtis for some fun in this HEAT and I think she must be nuts.   I thought Texas was hot last summer, but this global warming shit in South Carolina is ridiculous.   Call me a fool, but maybe Al Gore was onto something a few years ago.   If I say I’m sorry for all the hateful things I said about him, can we get our real weather back??   Summer Weather – Take Two.

Get me outta here, Percy…I’m a Red Man on the edge…and I’m lookin’ for the COOL.

4 thoughts on “Tennis Anyone?”