Please pardon the interruption for an unpaid political announcement: This weekend in Columbia, South Carolina in the Deep South in the USA the LGBTQ community and their friends, neighbors, family members and media will celebrate Big Time for the 25th. Anniversary of South Carolina Pride!

The Red Man sends Paw Snaps and Twirls for this major accomplishment and salutes the leaders and followers who have kept the faith in the importance of the Parade and Festival since 1989! 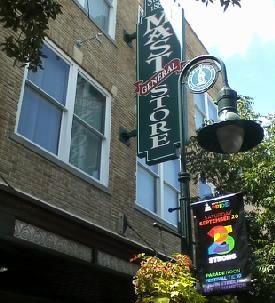 Nothing says Pride like a Parade so don’t miss out this Saturday a.m. – run, walk, fly, swim – but be there early!!

P.S. If you see an old lesbian waving from a float, it’s probably the old woman Slow catching a ride.  Pretty will be walking, of course.

P.S.P.S. Stop by the Business Guild booth from 1 – 2 Saturday afternoon to say hi to Slow.  She’d love to see you!